"They counted not their lives dear unto themselves" 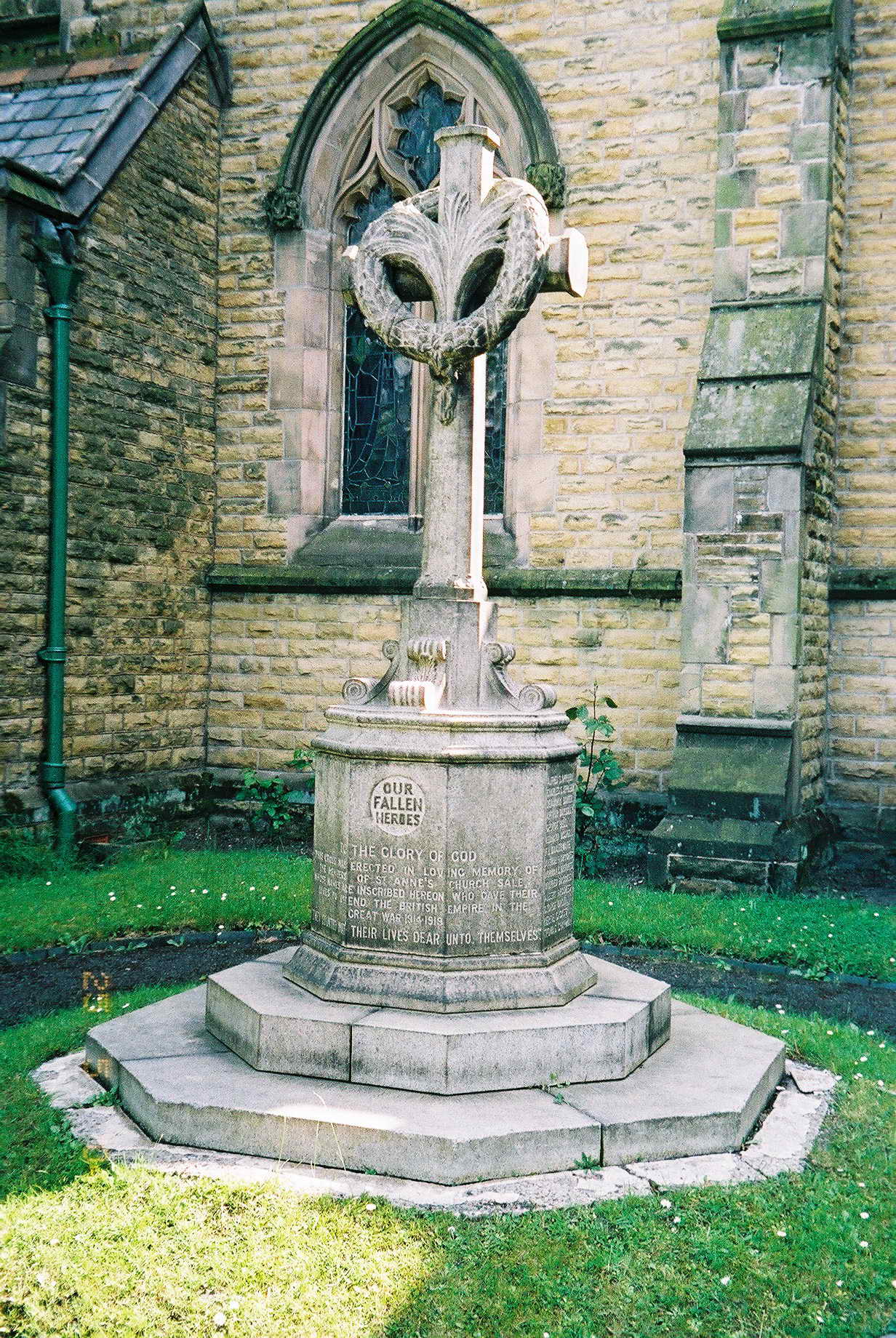 The stone cross is 11’6” in height and of grey Aberdeen granite, costing £300. It was designed by Mr Herbert Brown, FRIBA, of Beaufort Avenue, Brooklands and Brazennose St, Manchester (voluntary). The design shows a wreath of laurel leaves suspended from the head of the cross and in the centre of the wreath palms are displayed. On panels round the plinth of the structure are inscribed the names of the dead heroes and the face of the plinth bears the following inscription, which appears beneath the words “OUR FALLEN HEROES” worked in a bronze colour in medallion form:

TO THE GLORY OF GOD THIS CROSS WAS ERECTED IN LOVING MEMORY OF THE MEMBERS OF ST ANNE’S CHURCH, SALE, WHOSE NAMES ARE INSCRIBED HEREON WHO GAVE THEIR LIVES TO DEFEND THE BRITISH EMPIRE IN THE GREAT WAR 1914 - 1919

THEY COUNTED NOT THEIR LIVES DEAR UNTO THEMSELVES

The provision of a Memorial seems to have come after considerable debate. In a newspaper article announcing the appointment of the Revd Norman Veitch Scorer, MA, as Vicar of St Anne’s (1917) it is noted, “There is a feeling in Sale and neighbouring districts that the question of a memorial to the gallant men whose lives have been lost while on active service should now be seriously considered. In many other places the matter has already been solved, and there surely is no need to wait until after the war before making a decision as to the form a memorial should take. It at least could be sketched well in advance and would be a tangible object to be aimed at when a return is made to peace conditions”.

At the Annual Meeting held on 12th April 1918, it was moved that, “… The Vicar and Wardens have the authority of the Vestry to apply for faculties for erecting in the church memorials to the late vicar, men from the Parish who have fallen in the war and the late Mr SJ Tennant”.

A year later, on 25th April 1919, it was proposed that, “… the Vicar and Wardens have the authority of this vestry to apply for faculties for the erection in the church, or in the churchyard, of memorials to the late vicar and men from the Church and Christian Brotherhood, who have fallen in the War, also for memorials to Mr and Mrs SJ Tennant, former members of St Anne’s Church Sale”. A meeting was called for May 8th at 8 pm to consider a scheme as a memorial to the men who had fallen in the War”.

A newspaper article dated 26th June 1920 notes that the memorial cross, visible from the adjacent roadways, was erected in the grounds to commemorate members of the church who fell in the Great War. Prior to the unveiling, by the Bishop of Chester, a service was held in church.

The Minutes of the Parochial Church Council (PCC) Meeting on 3rd June 1921 record that the names ‘John Gratrix’ and ‘John Graham’ had been left off the Memorial Cross, and that ‘Henry Whitney’ was altered to ‘Herbert Whitney’.

In the presence of a large assemblage which included the Chairman (Mr. W. Hughes) and a number of members of Sale District Council and representatives of other public bodies, the handsome memorial cross, which has been erected in the rounds of St. Anne’s Parish Church, Sale, to commemorate 68 members of the church who fell in the great war, was unveiled by the Bishop of Chester on Saturday afternoon.

Prior to the unveiling service was held in the church, which was conducted by the Rev. N. V. Scorer (vicar). The lesson was read by the Re. P. Holland Lester, rector of Ashton-on-Mersey, and the Bishop gave an address. The processional hymn was “Soldiers of Christ, arise,” and other hymns were “Jerusalem the golden” and “Fight the good fight.” Mr. J. H. Stratton presided at the organ.

Following the service of praise in the church a procession was formed to the site of the memorial in the churchyard. The Bishop in the procession was preceded by Messrs. Harcourt Willson (people’s warden) and H. Howarth (sidesman), carrying their staves of office. The memorial is visible from the adjacent roadways, and large numbers of spectators assembled, in addition to those who came from the church. The names on the Roll of Honour were read by the Rev. N. V. Scorer, and the Bishop then pulled the cord, which released the covering of the memorial. “Let us pledge ourselves to live,” said the Bishop, “as their self-sacrifice and devotion have taught us to do.” This act of homage to the memory of the gallant dead was completed by the perfect sounding of the “Last Post” by Corporal Roberts, of the 6th Manchester Regiment.

THE LESSON OF THE HEROES.

The Bishop, in his address, at the service in church, said that on occasions like this they were all of one heart and mind. All of them, whether they had had personal bereavement in the war or not, were joined together in a true and loving bond of sympathy. The war had the effect of making them kinder to one another. He noticed it very distinctly in London, where it seemed as though people’s voices had grown gentler. And when those who were much younger than themselves, the brightest and gladdest in the nation, were taken by death in the war, eve the most worldly of men and women were touched by the significances. There was much sentiment talk as to life in the hereafter, golden crowns, angel songs, and a life of endless praise. He thought sometimes they became too much absorbed in imagery of that kind, and hardly stopped to think how far it could be likely to be real. The heroes who had left them did not want rest and quiet. No, they claimed work, and on earth their work was only just beginning, and he had the hope that in heaven the fair promise of this lives would have fulfilment, and would have a future more bright and brilliant than this life could give. The lesson was that through God they could thank those heroes for what they had done for their nation, and for having given the priceless blessing of a really good example.

THE SIGNIFICANCE OF THE
MEMORIAL.

The Rev. N. V. Scorer, in the course of a speech just prior to the unveiling, said that when the proposal was made to do something to perpetuate the memory of the men from St. Anne’s Church who gave their lives for King and country it was the unanimous wish and decision of the church officers and Church Council, members of the congregation, and of the relatives and friends of the departed that the memorial should take the form of across–at once the emblem of sacrifice, and the symbol of their Faith. In connection with this memorial, he stated that two names stood out prominently, those of Mr. Herbert Brown, of Beaufort-avenue, Brooklands, and Brazenhose-street, Manchester, who had designed this handsome cross, and given his services and advice voluntarily, and Mr. Henry Howarth, the hon. Secretary of the committee, who himself was bereaved of two sons in the war, and had worked with untiring zeal and devotion. They thanked most gratefully those gentlemen, and were further indebted to the generosity and good will of the subscribers to the appeal for their munificent and whole-hearted support.

As to the design of the cross, the architect desired him to explain that it was entirely original. The custom in cemeteries and churchyards was to erect gravestones with crosses, copied from designs made hundreds of years ago, and some of them having no special meaning and character. In this instance the cross stood out as the emblem of sacrifice, and the laurel wreath with the palms was a permanent offering of gratitude to the dear ones who fought and gave their lives in the great war. The War Memorial Committee desired to have a cross mounted upon a base large enough to receive all the names of the fallen heroes, and that object had been successfully accomplished.

This memorial was intended not as a reminder of the horrors and nightmare of war, but of heroism, loyalty, courage, and sacrifice of lives laid down for others.

At the close of the ceremony a reception was given to the Bishop in the school-room, at which Mr. Howarth announced that the committee intended to send a large photograph of the memorial cross to the relatives and friend of each name on the Roll of Honour. 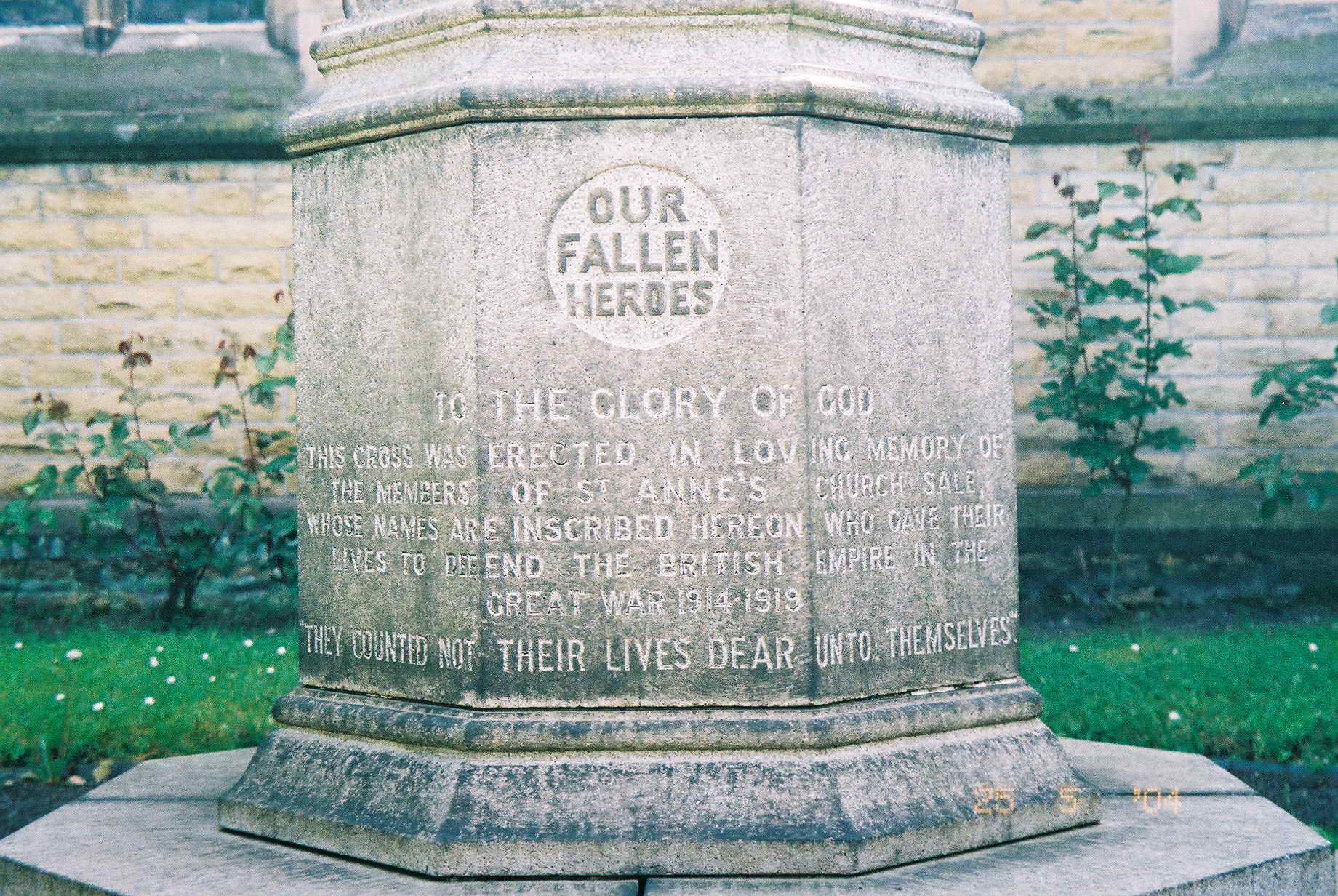 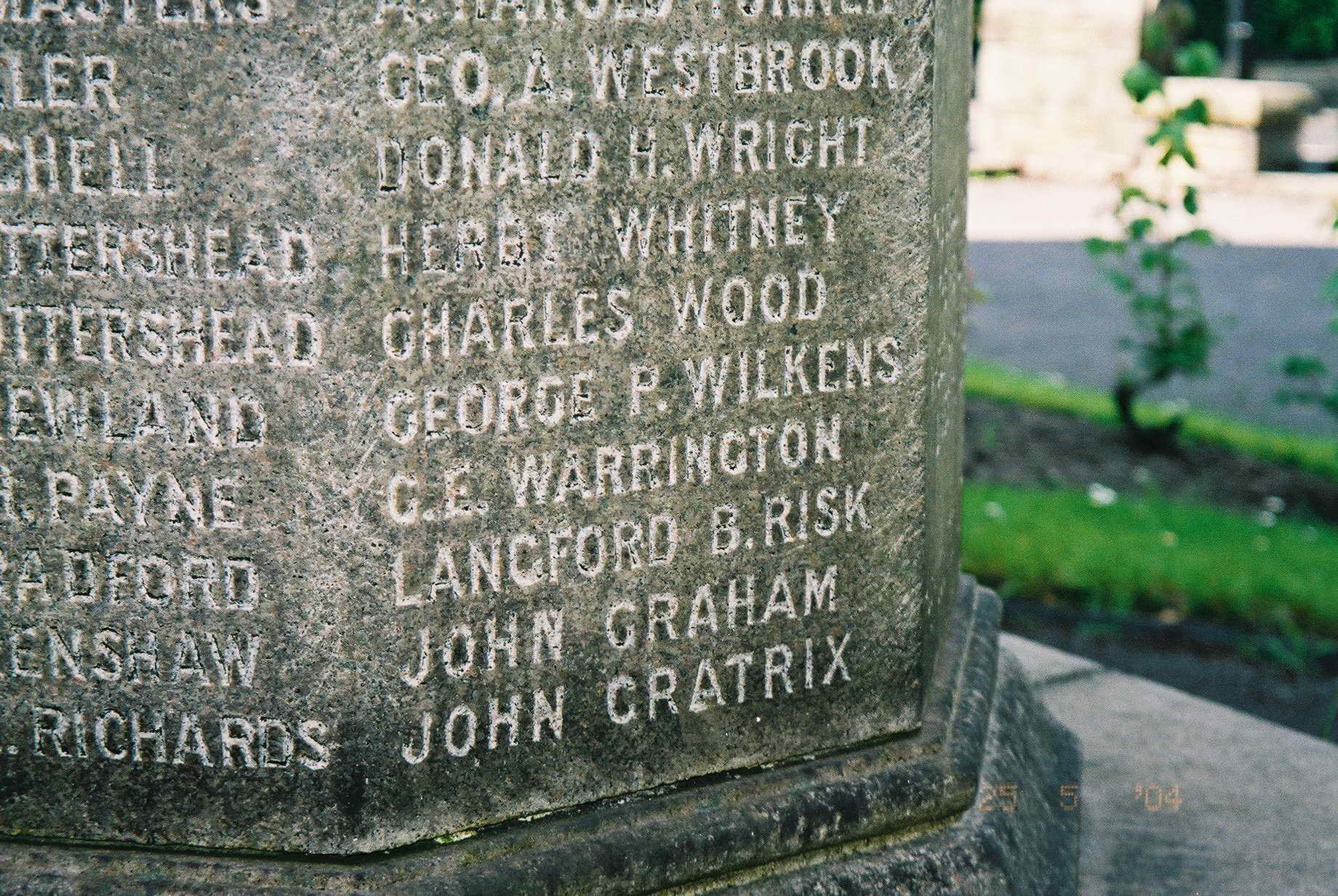